5 Results of Controversy in Your Business for 2016

Creating controversy in your business, passions, life, and impact on the world will get you noticed – that’s a certainty. There are advantages and disadvantages but speaking your voice and asking the question “Why?” may offer breakthroughs in your business and thinking mindset.

END_OF_DOCUMENT_TOKEN_TO_BE_REPLACED

We all know it’s that time of the year as everyone is talking about 2016 and new goals, challenges, etc. Consider spending some time over the next few days to examine what went according to plan and what did not.

END_OF_DOCUMENT_TOKEN_TO_BE_REPLACED

Will you hide in the Trees or truly Connect with your customers in 2016?

Many entrepreneur’s just love creating new innovative products and services. Over the years, I have coached and consulted with many business owners who continuously “hide in the trees” by constantly creating new things all the time and never truly connect with their customers. As the leader of the company, the founder must continuously connect and ENGAGE customers to launch the business forward.

END_OF_DOCUMENT_TOKEN_TO_BE_REPLACED

The Power of H2O

As athletes, moms, dads and driven focused personalities we often forget the benefits of daily water intake. Yes, it’s repetition of a message we hear all the time “drink more water during the day and you will feel better.

END_OF_DOCUMENT_TOKEN_TO_BE_REPLACED

Are you considering starting a business in 2016?

The question so many individuals contemplate at this time of the year, “Should I climb the mountain to become an entrepreneur?” – picture above is from Mt. Cotopaxi, Ecuador summit at 19,347 feet – June, 2015.

The end of the year brings reflection and deep thinking toward an establishment of some parameters and goals for 2016. Planning too far in advance become as hinderance for many as the world changes so quickly, so consider some short term 3,6,9 month goals for 2016 and really go aggressively toward the target. Self accountability is imperative for making it happen. 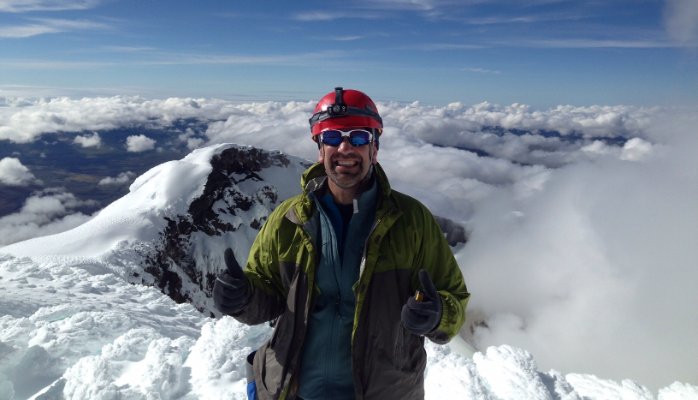 The short term journey of success or failure will provide plenty of life long value and lessons. I have failed many times and still remember back when we entered the retail space of tuxedo rentals! – too long of a story but will mention the learning lessons in future posts.

Consider all the entrepreneurial possibilities, risks, failure potential and most important what I call “The Scared Factor”. Analysis/Paralysis can take over so often before taking a jump on your own. This happened to me many years ago then finally and intentionally I asked myself the question we all know so well “What is the worst that can happen?”. Forget about financial concerns, being scared, etc. you probably will not die.

Working for yourself and building a team is extremely difficult – NO QUESTION about it! If anyone tells you something different then it’s just B.S. You will make a ton of mistakes trust me. You can read everything imaginable on being an entrepreneur and you will still fail on certain aspects of your business. However, there is nothing like the feeling of actually taking a risk, going in with some due diligence (quantitative and qualitative) and believing 100% in yourself that you can make A Sale! That’s it and intentionally adding value to people and build it over time through gradual progression.

Remember more than anything else, selling is the number one thing in the business. Without a sale it’s just a great idea and a hobby.

The video of me – the bald guy, is related to endurance sports athletes but has cross over benefits for those of you considering starting a business. You don’t need 10,000 hours of expertise to start a business or be considered an expert, you don’t need to have the most innovative product imaginable, you don’t need to completely disrupt the market – just create value to an individual and see where it leads – with a simple 2 page business plan!You Don’t Need 10,000 Hours

I love hearing from entrepreneurs and if you need ideas please don’t hesitate to reach out to me.

END_OF_DOCUMENT_TOKEN_TO_BE_REPLACED

Entrepreneurs have you read The Fountainhead lately?

The classic book by Ayn Rand, The Fountainhead written in 1943 offers many insights to entrepreneurship through it’s main character – the brilliant architect, Howard Roark. If you have not read it, consider adding to your reading list. Fair warning, it’s a big book in size (similar to Atlas Shrugged).

END_OF_DOCUMENT_TOKEN_TO_BE_REPLACED

Local Man Competes In Triathlon Every Day For 30 Days

PITTSBURGH (KDKA) –A local man has completed a sports event that most of us get winded just thinking about.

He competed in a triathlon every day for 30 days.

This is a story about a man, an iron man, three times over. For 46-year-old Wayne Kurtz, it happened in Lake Garda, Italy. It began Sunday Sept. 8 and ended Monday Oct. 7.

It sounds impossible. A triathlon every day for 30 days, but Kurtz, an investment company executive, did just that.

“Every day at 7:45 a.m. we showed up at the pool. The gun fired, the race lasted anywhere between 11 hours for the day up to over 20 hours for the day, depending on what happened,” said Kurtz.

Kurtz, who is in great physical shape and works out daily, says the race was 30 percent physical and 70 percent mental.

The key was to stay in the moment, focusing on one event and one day at a time.

“My mantra going in was there was no option of not finishing,” Kurtz said.

And finish he did.

Twenty men and one woman began the race, eight men finished. Kurtz was the sixth to cross the finish line.

He was about 30 pounds thinner, and there was no prize money; just the gratification of knowing he did it.

This was a first event and it has already been submitted for the Guinness Book of World Records.

END_OF_DOCUMENT_TOKEN_TO_BE_REPLACED

Man Commits To Running On Treadmill Upon Start Of Pittsburgh Marathon